Bright and Chaedi met in Tinderwood — he arrived there late in his teens, a too-lean, wild-looking tiefling, and was unexpectedly welcomed into the temple of Melora by Chaedi’s guardian, the head priest, Kerreck. This kind gesture was the first of a series of kindnesses offered in Melora’s name, and won Bright’s faith and grateful devotion for the rest of his life. When Kerren asked him to accompany Chaedi and investigate a strange disturbance not far from Tinderwood, he was glad to repay the older elf’s kindness, not knowing that this one encounter would drag him away from the place he still didn’t dare call home, possibly forever.

Bright is an accomplished fighter and he learned with the weapons he had at hand in his childhood: knives, sometimes stolen, sometimes old and pitted, sometimes in poor repair. As the goblins who raised him trusted him further, he began training and hunting with other weapons: bows, longswords, clubs. He is an adept fighter with all of these, and learned stealth and agility from the goblins as well – but when he finally betrayed their hard-won trust, repaying years of abuse and hatred, his weapons were knives, quiet, quick, and definite.

When he arrived at Tinderwood, and even moreso after meeting Chaedi, Riii, and Wenner, Bright began a new phase of his life. Instead of being focused on survival, on hunting and hiding, he became aware of just how little he knew about civilization. It sometimes felt like his entire life since then had been learning how to behave, and just how little he knew about civilized life.

As he’s gotten to know more people, like Rowin, Lo-Kag, and Tayschrenn, Bright has also been studying Dagger, a hawk companion who was not so much tamed as impressed by him, and who he truly believes was sent by Melora as a gift and example. In watching her hunt and fight, Bright has realized the boundlessness of her confidence comes from her inflexible sense of who she is and what she does. Bright has striven both to mimic her talons in his fighting, and to gain her confidence in his world outlook. He has come to accept, in the present day, that his strengths lie in the hunt, the knife, the stealthy creep and the pounce. He is not, and will never be, a diplomat, or a speaker, or a great leader. He is a killer, and he will use the gifts that he has with Melora’s grace.

Bright is not especially tall, only 5’7" or so – a physician might wonder how malnourishment played into his bone structure, as well as his lean frame. When he hunts or falls into combat, he looks shorter as he falls into his crouch, blades out, ready to hurl himself at the nearest enemy or leap into a dive-and-roll. In past, he’s felt this threat in most social situations: walking through a city, standing in the chambers of royalty, working his way through polite conversation – all dangerously unfamiliar, all causing discomfort.

Lately, however, he seems to have grown to his full height, standing tall and unflinching. Where before he would shrug and cringe as he looked elsewhere for guidance, now he holds his spine straight in a way that uncannily echoes Dagger’s poise. When he does not know the answer, he may look to Chaedi or Lo-Kag for guidance, but he no longer shows shame in it – or he may stare straight back, content in and unapologetic for his own limitations.

In the bare couple of years since he’s found civilization, Bright has filled out a little from the frightening leanness of his forest-dwelling days to something healthier. He still bears old scars on his back from his time as a goblin slave, and he still eats quickly, as if no time should be wasted when food is at stake. He is lucky enough, with Chaedi’s intervention, to have picked up relatively few new scars, as she has healed most of his wounds magically; a couple of slashes across his chest from skeletons are all that has survived from his battles. Bright’s body has not really changed, but his bearing has; everywhere he goes, now, he seems less like a frightened animal, and more like a hunter that has taken the forest with him.

She and Bright have, in the few months they’ve spent together, cultivated a surprising bond. In the heat of battle, a shared glance or a whistle from either her or Bright is all the coordination the two need to flank and attack a foe. In the past few weeks of struggling through all sorts of trouble, they seem to have grown closer, communicating without meaning to. At a sudden noise, their heads will both cock at the same time in the same direction; in battle, their reflexes will send them both in opposite trajectories to strike at the same enemy without a single whisper of planning. And yes, a careful observer might notice some pride in the way she fluffs her plumage after a terrible battle, landing again on Bright’s shoulder. 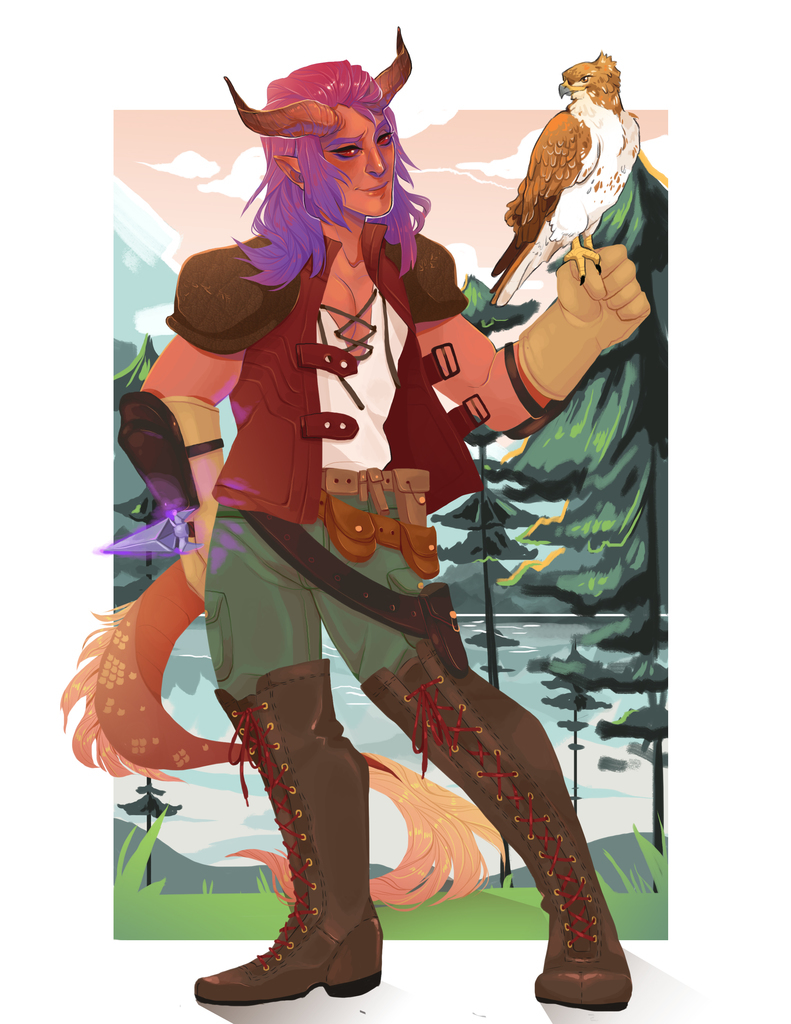