Lo-Kag grew up in a goliath commune, in the Joten mountains. He spent his summers travelling the high plateaus and cliffs, where the goliaths hunted mountain goat and tended to small root crops. The winters forced his people to descend into the valley, where they followed the reindeer south, stopping to trade their skins and meats with the small mining villages which dotted the hillsides and finding shelter in those places when they could not outrun the worst of the winter storms. Sometimes they were ambushed in the night by hungry hill giants, and if they were especially lucky, the giants would come alone.

Lo-Kag cherished the summers, and his yearly return to the Jotens — though the climbs were dangerous, he preferred the freedom and self-reliance of the mountaintop villages to the slow trudge across the snow-choked valleys. He had spent his share of brutal winter months hunched over in tunnels built for dwarves, a gangly youth carving ore from the mountainsides in exchange for temporary shelter. This toil made him strong and agile, and by his seventeenth summer he was known throughout his commune as an exceptional cliff racer, and as a fair caber thrower. It was in his seventeenth summer that Lo-Kag began training with the commune’s wardens and learned to channel the primal force of the mountain, and it was in that same summer that Lo-Kag murdered his younger brother, Lo-Par, after discovering his necromantic experiments.

After facing exile for his crime, Lo-Kag travelled as far as he could from his homeland, eventually coming to rest in the low hills near Ratheradir. There, he fell into a self-destructive spiral, recklessly throwing himself into battle against the slow trickle of undead creatures that strangely seemed to plague the nearby rural homesteads. It was during one of these skirmishes that Lo-Kag met the dwarven ranger Barthol, and upon learning the extent of Lo-Kag’s anger and hatred towards the undead, Barthol introduced him to Duvok, and to the Circle of the Dark Wing. Until his first meeting with Bright and Chaedi, Lo-Kag continued his training as a warden, and as a member of Duvok’s Circle he learned discipline through the dogma of the Raven Queen. Most importantly, he learned how to effectively use his skills to destroy the undead.

Goliaths are somewhat of a rarity in the southern lowlands, and Lo-Kag has become used to being stereotyped as a slow-witted giant because of his appearance and sometimes laconic nature. For his part, it suits him fine if others underestimate him. Despite his ferocity in battle, Lo-Kag would often rather consider all avenues to resolving a dangerous situation before needlessly spilling blood.

In many ways, Lo-Kag sees more of a kinship between himself and Bright than with any other comrade. Besides their shared affinity for nature over densely-packed cities, Lo-Kag greatly respects Bright’s battle prowess and pragmatism. Travelling and interacting mostly with elvish folk can be somewhat alienating to shorter-lived people, and Lo-Kag appreciates that Bright is often willing to take the short view of a situation, even when it seems reckless to do so. Though his struggles and past are still largely opaque to Lo-Kag, his conviction is clear. Sometimes when watching Bright and Dagger work together, Lo-Kag is pained by nostalgia, remembering how the hunters in his commune would send their golden eagles to throw goats over the cliff edges.

Chaedi is a natural leader, and although they have very different approaches to dealing with verbal and political conflicts, Lo-Kag has learned to trust her instincts, especially in situations where a measure of diplomatic delicacy is required. Between her skills at healing, and at negating necromantic energy, Chaedi is probably the most magically powerful person Lo-Kag has ever met, and he knows he would be dead many times over if not for her. He admires her seemingly endless capacity for altruism and mercy, but has been frustrated when she extended this mercy to an undead abomination.

Lo-Kag feigns a mild disdain for Riii’s mischief and complete lack of tact, but secretly he finds it kind of hilarious. Every once in a while, when the others are out of earshot, Lo-Kag may mutter a sarcastic barb to Riii in solidarity, especially when he begins to tire of the pomp and political intrigue of the nobility.

Already an incredibly skilled arcanist, Tayschrenn is young, curious, intellectual, and idealistic. Lo-Kag finds this extremely worrying — more than anyone else he has ever met before, Tayschrenn reminds him of his bookish younger brother, Lo-Par. A lifetime of hunting necromancers has made Lo-Kag somewhat paranoid of the arcane arts, and while Tayschrenn’s heart seems to be in the right place, Lo-Kag knows too well how a wizard’s good intentions can lead to pride and tragedy. For now, he will keep a close eye on Tayschrenn, and hope that his worries are unfounded.

Lo-Kag is no longer a typical Goliath. The Stoneblessing is the most obvious of his recent afflictions—he has become massive, even for a Goliath, standing well over eight feet tall. His arms have stretched, giving him a lanky appearance that belies his strength. His rough hide has become smooth and striated, like imperfect marble. His green eyes have callused and turned featureless, like rocks polished at the bottom of a river. The small lithoderms speckling his joints and forearms have become transparent, scattering the light unpredictably into its spectral colours.

The Stoneblessed, though rare, are at least understood by Goliaths as a normal variation. The changes brought on by Lo-Kag’s deeds as a Warden are far more alien. Using his own body as a conduit for raw primal energy instead of learning safer ways to channel it has left him in a constant state of change. Though he can consciously control this, when he is distressed or even lost in thought these energies subtly manifest themselves to the onlooker—vines creeping just under the surface of his skin, smoke gently curling from underneath his fingernails, a smell of fog and rain and ozone around him, or a quickly vanishing blur of fur and fangs in your peripheral vision.

Lo-Kag has become a stranger in his own skin. Not entirely flesh and blood anymore, and unsure of how he fits into the natural order. Worried that his rapidly-changing appearance and mannerisms could alienate him from the people he works to help, but more comfortable with the constant fluctuation than with allowing himself to remain static for too long.

He wears simple clothing in neutral, earthy colours. In battle, he favours hide armour and long-hafted sledgehammers. He throws himself into the middle of the fray, forcing his enemies to chip their teeth on him before they can move toward softer prey. 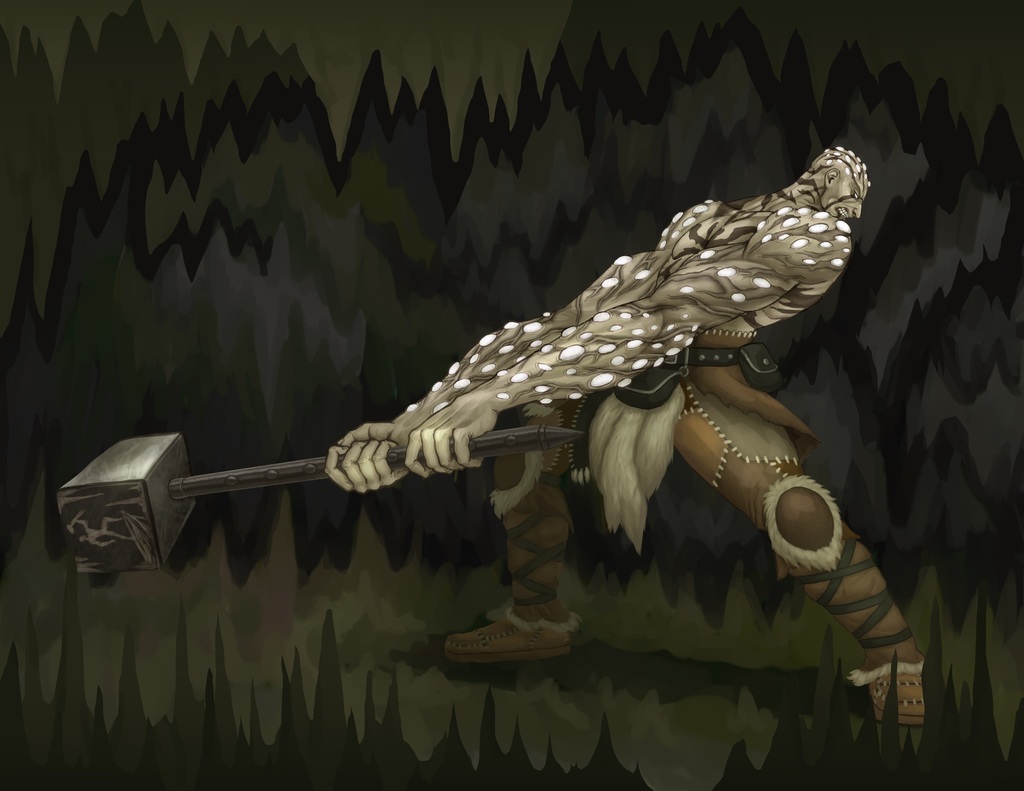